Munich is slow in adopting new trends – but IF we think that something is cool, we dive into it head first.

So the Food Truck- hype finally did make it to Munich and I just came back from Circus of Food. With over 40 food trucks this was one of the biggest gatherings lately. Although there is much meat on offer, like Burgers and Hot Dogs, several vegan options were available.

Meeting up at the Viehhofgelände – a really cool place which also host a great outdoor movie event in summers – the list of trucks was impressive – you can find the list HERE.

Want to know what vegan delights have been on offer?

meikaii is a vegetarian & vegan truck – with focus on vegan.

They also have desserts on offer,  rice pudding in four flavors: Coconut, Apple-cinnamon and chocolate (all vegan) and Tiramisu (not vegan). We could not decide between Chocolate and Apple, so they did offer us a “both in one bowl”. Decorated with chocolate sprinkles, cinnamon-sugar and a home made strawberry sauce this was HEAVEN!! 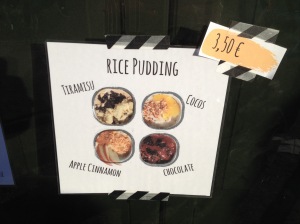 Next Stop was Boonian. They are an all vegan Food Truck – and they say so loud and clear. 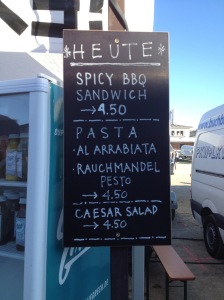 We had a Spicy BBQ Sandwich, which was fantastic, followed by Pasta with a roasted almond pesto and vegan parmesan. As I am a big pasta lover, this made my day! Boonian currently is trying to build up their brand and are selling their BBQ into restaurants like Lost Weekend, Café Reitschule and soon also into several Burrito Shops. It is definitely worth to look out for them! 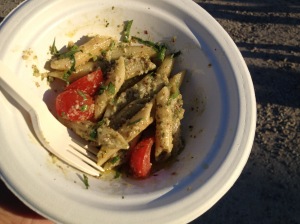 We also stopped by at “Die Intolerante Isi”. If you suffer of any food intolerance, this is your truck to go. No matter if gluten-, lactose-, eggfree, Isi has something for you. And as I am “ethical-moral intolerant” against animal products, this is where I have been heading too. I did get a sweet potato curry with zucchini and quinoa – mhhh!  Normally Isi also has vegan sweets, today they have been sold out – bummer!

Burrito Bande had  a Greenhorn Jack Burrito (originally vegetarian), but they explicitly offered a vegan version. 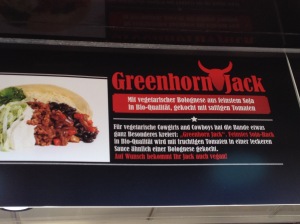 I shared one with my husband – Yummy! And to watch those guys produce on burrito after the other like on an assembly line to loud cool music was joy in itself.

Two more trucks had vegan food, but I have been full – so I only took some pictures.

nonidu did offer a vegan salad as well as a vegan soup. They looked really nice as did the girls behind the counter. 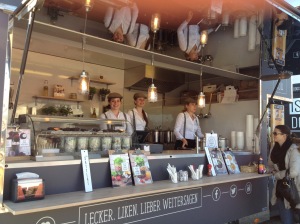 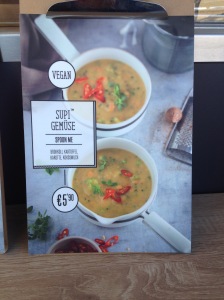 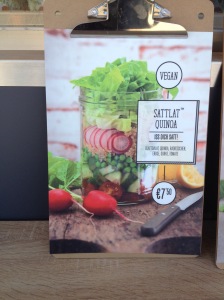 The last vegan offer was a Falafel Booth. Those classic chickpea balls are always a delight and real soul food – check out how tasty this looks! 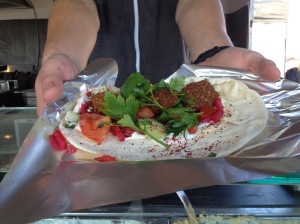 To stay on the vegan side with drinks is not hard in Bavaria. Keep to water or beer! Thanks to the Reinheitsgebot (German Bear Purity Law) Bavarian beer is vegan.

Besides Circus of Food there are several more Food Truck organizers who are planning new events – so Save the Dates!

Mai 2nd: The next really cool event – especially for vegans will be the ALL VEGAN Food Truck gathering organized by Wannda Circus. More information (in German) on their Facebook site

May 10th: Food and Music at Praterinsel, organized by Deine Welt. I have been there last weekend and it was real fun!

Hall of Tast: each week Friday, starting at 16:00 at MMA (Mixed Munich Arts), Katharina-von- Bora Strasse 8. I have been there once and I really liked the location.

Food Truck Circle: Thursdays in front of  the America House, Karolinen Platz. Dates will be annnounced via their Facebook account.

More Info about Food Trucks in Germany can be found here: http://www.foodtrucksdeutschland.de/

I really love the concept of Food Trucks – cool food, cool people and cool places – hope you will have fun too!